Privatising the atmosphere: A solution or dangerous con?

In 1833 William Forster Lloyd wrote a pamphlet (Lloyd, 1833), which described what has later become known as the ‘tragedy of the commons’ (see Hardin, 1968). It described how self-interested subsistence farmers would destroy common land by over-stocking it with cattle. If you are struggling to feed your family then short-term self-interest is understandable, although there are numerous examples of how communities across the globe have worked collectively to sustain their local environments for hundreds or even thousands of years.

Climate change is often described as the new tragedy of the commons as self-interest prevents countries from living within their fair share of the planet’s atmospheric carbon carrying capacity. Carbon trading is promoted, largely by wealthy countries, as the silver bullet to solve this age old problem. Divide the atmospheric carbon space and allow countries and corporations to buy and sell it (much like some economists responded to Lloyd’s argument by stating that assigning property rights to the commons would solve the problem). Is this a great idea or dangerous con? This note examines this question and concludes that the answer is the latter.

The first question that should be asked in devising an international climate strategy, including setting up a global carbon trading scheme, is how much atmospheric carbon space is left? The next question is how should it be shared out? On the face of it, these appear to be simple questions, but, of course, in practice they are devilishly complex.

But the greatest difficulty of all is how to share the remaining atmospheric carbon carrying capacity between countries.

The recent Durban UNFCCC negotiations and the almost 20 years of negotiations before them have centred on this last difficulty, which is in essence a political and ethical choice and not a scientific one. It is true that debates on climate sensitivity and what a ‘safe’ level of global average temperature increase consists in have occupied a lot of time and space, but nothing compared to the question of how much pollution rich countries should be able to emit and how much poor countries should be able to.

What is clear from most analyses of global carbon budgets is that there is not a great deal of atmospheric carbon space left. Rich countries through the G8 have said that to prevent dangerous climate change we need to keep global average temperature increases below 2 degrees compared to the pre-industrial level. By dangerous climate change they mean unacceptable impacts to people and economies as well as too high a risk of positive feedbacks. Positive feedbacks are where increased temperatures create changes on the planet that themselves create further warming, for example warming leading to the release of vast quantities of methane (a powerful greenhouse gas) due to the melting of Siberian permafrost. The choice of 2 degrees was largely informed by scientific research that led to the production of an influential ‘burning embers’ diagram (see diagram 1). 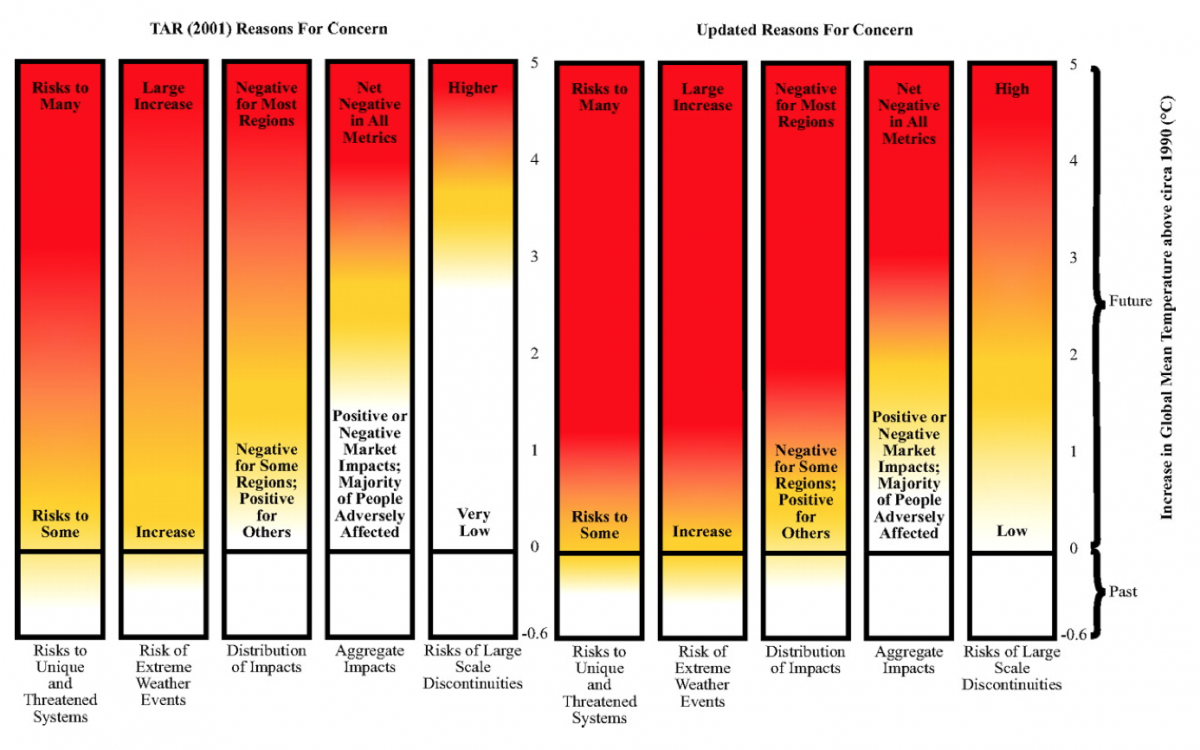 ‘Risks from climate change, by reason for concern – 2001 compared with updated data’

Through the work of setting self-imposed carbon budgets as a result of the Climate Change Act, the UK has been more explicit on this choice through setting in law a UK carbon budget that gives around a 50 per cent chance of avoiding 2 degrees if other countries make similar commitments. A 50:50 chance of avoiding dangerous climate change is, however, not great odds if you live on the front-line of climate change, for example if you are a subsistence farmer in Africa.

Many developing countries argue that a safer temperature target is to keep global average temperatures to less than 1.5 degrees above the pre-industrial level. A recent update to the burning embers diagram certainly suggests that this target is more in line with the original thinking behind the setting of the 2 degree target (diagram 1). Again these countries have not been explicit regarding the level of certainty they want to avoid this temperature target. The nature of the debate and the risks faced by their populations would suggest that they want as high a chance as possible of avoiding temperatures above 1.5 degrees. What this means on the size of the global carbon budget is that there is very little carbon budget left.

Sharing out the global carbon budget

As stated above, the bigger debate is around how to share out this global carbon budget. Given that even the G8 target implies very limited atmospheric carbon space, the debates have been fierce.

NGOs and developing countries have argued that it would be wrong to ignore the carbon pollution released by rich countries since the industrial revolution. The US American Government argued at the 2009 Copenhagen talks that historic emissions may be interesting for authors of history books but are irrelevant to negotiations. In effect it is like they admit they have eaten half the cake but that this should have no bearing on how much of the remaining cake they should eat. NGOs and developing countries argue that historic emissions should be taken into account, with some advocating a historic base line of pre-industrial revolution, some 1970 and some 1990.

Furthermore, the US American Government argued that emissions reductions should be set using a bottom-up process of countries setting their own voluntary reduction targets (from which carbon budgets can be roughly calculated assuming steady year on year reductions towards these targets). This was the approach of the Copenhagen Accord. The USA pledge amounted to 4 per cent less emissions than 1990 levels by 2020. This bottom-up approach led to the nonsensical position where the Copenhagen Accord on the one-hand sets an aspiration of keeping the temperature increase to less than 2 degrees but the reduction pledges made were in line with a temperature increase of around 4 degrees (Pew Center, 2010).

NGOs and developing countries have argued for a top down mandatory approach based upon a fair share of the global carbon budget which is itself based on population sizes. This ‘fair shares’ approach, not surprisingly, requires much higher carbon reduction targets for rich countries than the US American Government or other rich countries are currently willing to contemplate.

Carbon trading is being pushed strongly by the USA, EU and others as the tool to enable an economically efficient transition to a low carbon economy without breaching any agreed temperature increase. Friends of the Earth, other NGOs and many developing countries have been very critical of this approach. There are four main reasons for this:

In addition to these reasons, NGOs and others have also argued against carbon trading as the time required to set up a global system is too long and distracts from the use of faster policy responses, from opposition to the commoditisation of the atmosphere, from finance siphoned away from carbon reduction to make carbon traders rich, and from the risks of private speculators creating a carbon sub-prime market similar to the housing sub-prime market. These arguments are further developed and examples given within Friends of the Earth’s report ‘Dangerous obsession’ (Friends of the Earth, 2009).

Negotiations on temperature targets are far from being concluded with many developing countries refusing to accept a higher temperature target than 1.5 degrees above pre-industrial levels and the USA, EU and other rich countries unwilling to accept anything lower than 2 degrees. Reduction targets for countries remain deadlocked with the USA refusing to accept a top down mandatory approach to target setting and the EU not prepared to increase its target to be in line with even a 50:50 chance of avoiding a 2 degree increase. Agreement on whether to include historic emissions also remain deadlocked. And finances pledged at Copenhagen have, on the whole, failed to emerge or are simply rebadged Aid money.

Carbon trading remains the number one policy objective of the USA, EU, other countries and a plethora of carbon trading vested interests, even though its weaknesses are increasingly recognised. The vast majority of developing countries will not accept a global carbon trading regime. They view the proposal as unjust because they see it allowing rich countries to pollute when they instead have to curb growth (under proposals by the American Government trading would allow the USA to increase its emissions until 2030). Whilst some developing countries want to use the CDM mechanism and newer versions, such as sectoral trading, to bring much needed money into their country, many see this as unacceptable or a poor second best to much larger financial flows from other sources. Overcoming these differences looks like a Herculean task.

There are good reasons to oppose carbon trading because in effect it privatises the atmosphere. But perhaps more importantly carbon trading is a dangerous con, which promises to insert massive loopholes in any future international agreement and puts off the urgent task of countries like the UK making the transition to the low carbon economy. What is needed is global political acceptance of the urgency of the problem coupled with the use of policy measures that can be applied swiftly to reduce emissions fast – regulations, tax and spend are policy measures that better fit the bill.

Mike Childs is Head of Policy, Research and Science at Friends of the Earth. He has worked at Friends of the Earth for over 20 years, working on issues ranging from factory pollution to water resources to climate change. Prior to working at Friends of the Earth he studied at the Biology Department at the University of York. He also worked for 4 years with an environmental consultancy specialising in the reclamation of contaminated land. He lives in York with his partner and two young daughters. vol. 19, no. 4
The ethico-politics of whistleblowing: Mediated truth-telling in digital cultures
Nov 2019
END_OF_DOCUMENT_TOKEN_TO_BE_REPLACED