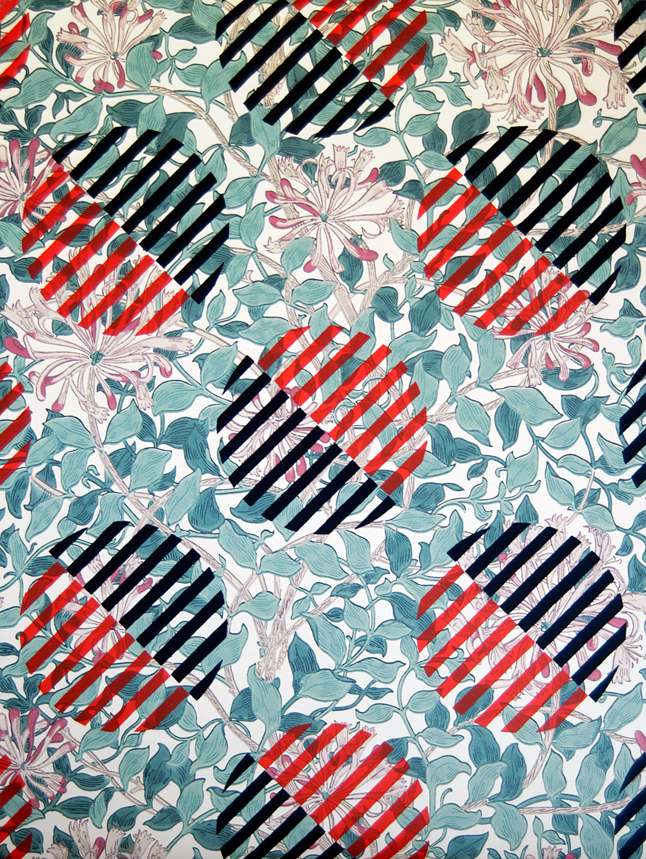 As a designer, William Morris thought that interior design had a fundamental role to play in the transformation of everyday life.[1] His hand printed textile and wallpaper designs are highly schematised representations of nature, where it is always summer and never winter; the plants are always in leaf, often flowering, with their fruits available in abundance, ripe for picking, and with no human labour in sight. This is a utopian vision, an image of Cokaygne, the medieval mythical land of plenty, but easily acceptable to the upper middle classes and even some aristocrats of the time. Today his work is very safe and comfortable, and his wallpaper and fabric designs are widely reproduced in machine printed form and can be found furnishing the most conservative semis of middle England. Although a form of democratisation of Morris’ designs, their wide availability is also a debasement, as a compromise is made whereby what Morris called ‘beauty’ is sacrificed for mass production. It is the space opened up by the contradictions between how Morris’ designs can be read, and how they have subsequently come to be used and understood, that the prints navigate. 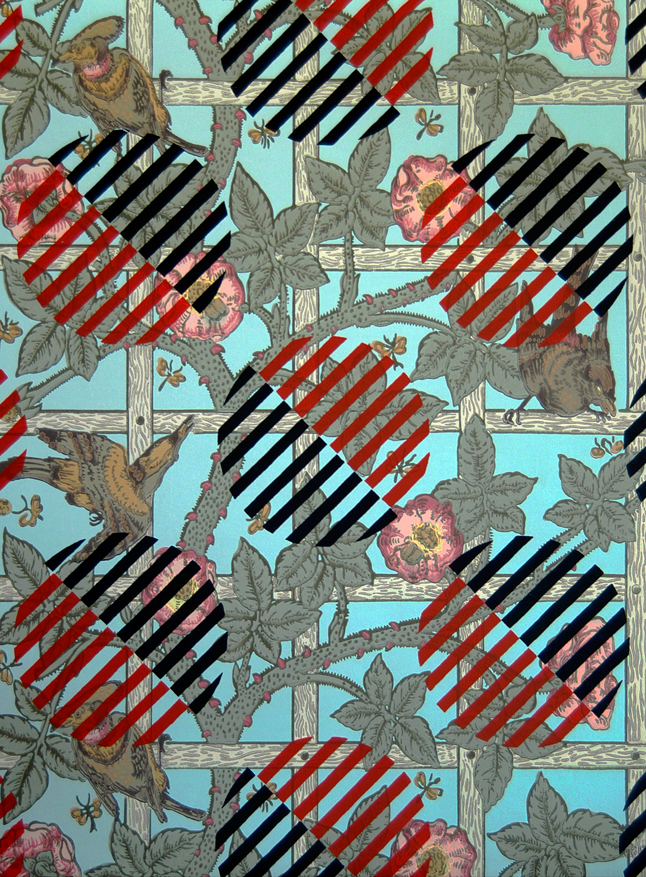 ​During 1923-24, shortly after the Russian revolution, the Constructivist artist Luibov Popova designed textiles for the First State Cotton-Printing Factory in Moscow. Christina Kiaer writes that Popova and fellow artist Varvara Stepanova were

the only Constructivists to see their designs for everyday, utilitarian things (other than posters and publication graphics) actually mass-produced and distributed in the Soviet economy. They fulfilled the Constructivist brief of abandoning the role of individual artist-craftsman and entering into collective factory  production as ‘artist-productivists’ to produce utilitarian things for the socialist collective. (Kiaer, 2001: 186) 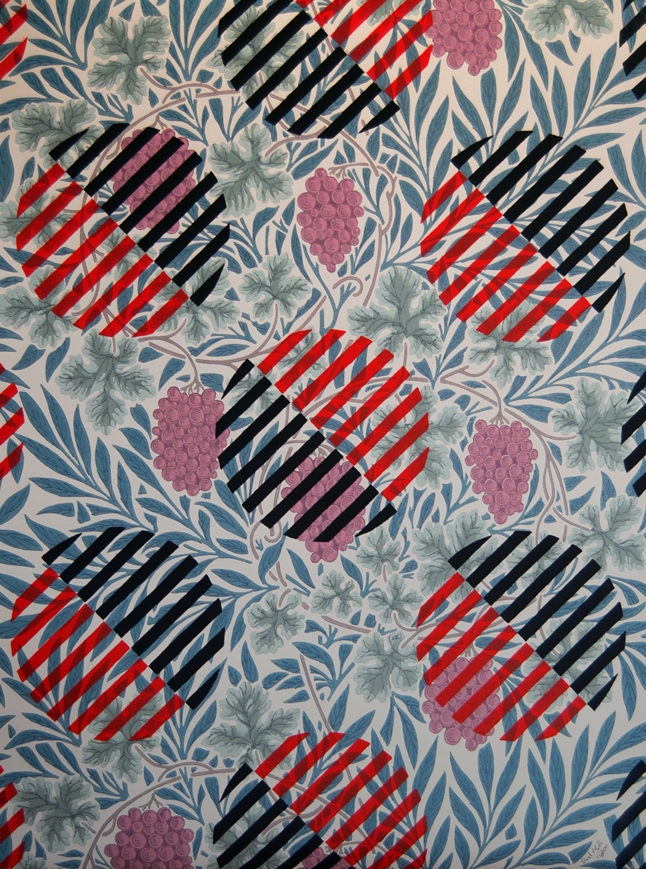 Popova’s and Stepanova’s textile designs during this period are virtually indistinguishable: simple bold geometric patterns in black and primary colours, often with optical effects. In 1925 Alexander Rodchenko, in a letter to Varvara Stepanova, his collaborator, comrade and wife, wrote, ‘Our things in our hands must be equals, comrades, and not these black and mournful slaves…’ It is this counterproposal to capitalism’s commodity fetish that inspired what Christine Kiaer has called the ‘comradely object of socialist modernity’ (2005). 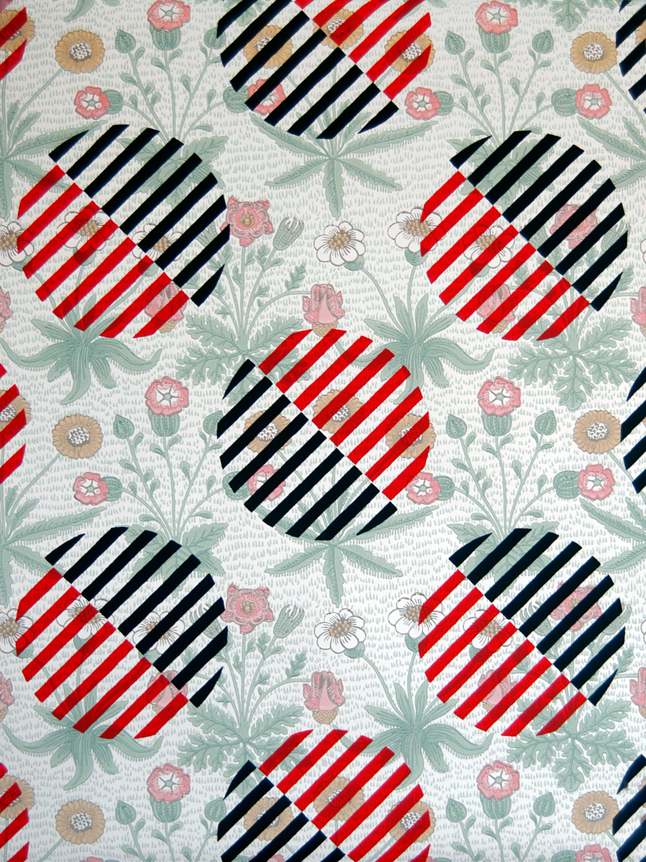 In the prints shown here, one of Popova’s textile designs in red and black is screen-printed onto different contemporary machine printed Morris wallpapers, including well known designs such as Fruit, Willow Boughs, Trellis, Brier Rabbit, Medway and Daisy. As a consequence of the different wallpapers used, and the random registration process (each of the Popova designs is printed in a slightly different place on each Morris design), each work is unique. The prints measure 52.5 cm, the width of a roll of wallpaper, by 70 cm, and were issued in an edition of one hundred. The prints were advertised at the Historical 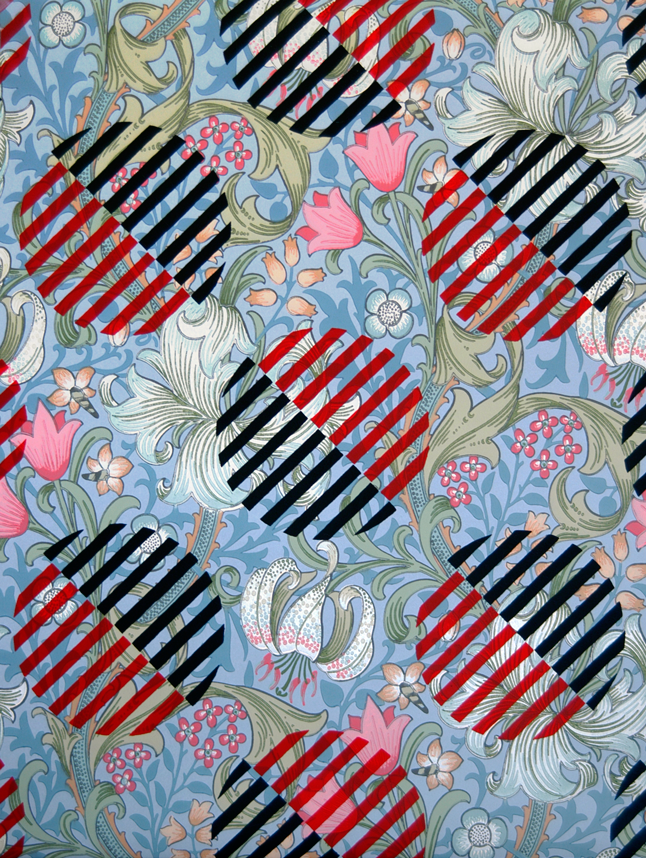 Materialism conference in London 2010, in the Historical Materialism journal and on the Historical Materialism and other leftist websites. The proceeds are being used to publish an English translation of the writings of Boris Arvatov, the Russian art historian and critic who promoted the production of utilitarian objects by artists and the organization of everyday life by artistic methods. He wrote, amongst other things, ‘Everyday Life and the Culture of the Thing’, (Aratov, 1997) which ‘attempts to imagine how socialism will transform the passive capitalist commodity into an active socialist object’ (Kiaer, 1997). 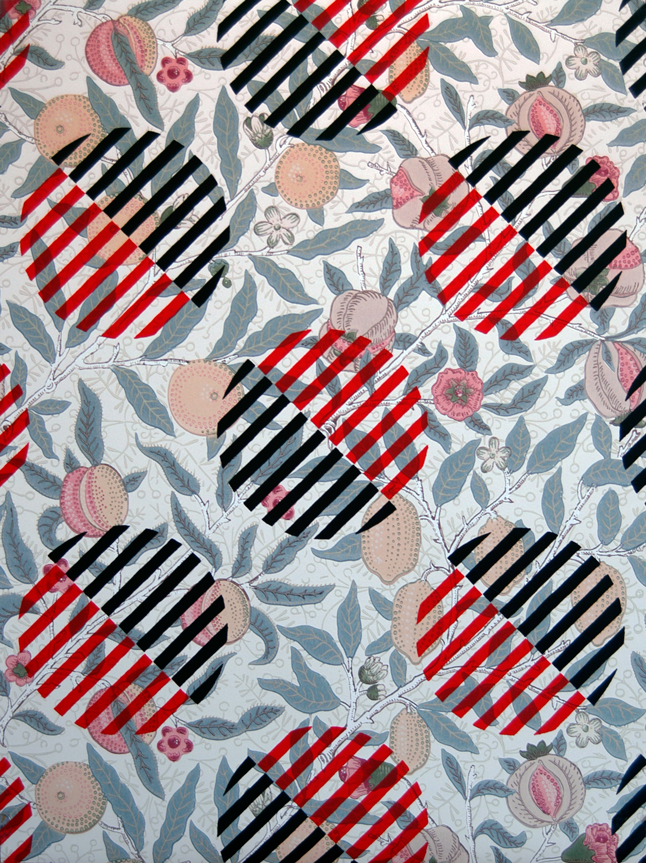 Although Popova’s Constructivist designs arose in a different geographical and historical context, and are visually very different from Morris’ designs, both artists produced them as part out of a commitment to the transformation of everyday life. In the prints, the separate designs come together as comrades, to ​create a dialogue where the Popova and the Morris designs ‘radicalise’ each other, revivifying the political content of each to create active socialist objects that purposely suggest an emergent transformation of the world.​​

David Mabb is an artist and teaches Fine Art at Goldsmiths, University of London.
E-mail: d.mabb AT gold.ac.uk The algorithmic panopticon at Deliveroo: Measurement, precarity, and the illusion of control
Jamie Woodcock
END_OF_DOCUMENT_TOKEN_TO_BE_REPLACED